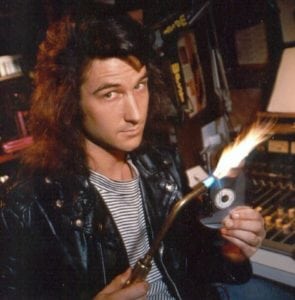 One of the biggest names in Philly radio, MEL TOXIC burst onto the music scene in 1983. After college radio stint on 91.7 WKDU at Drexel University in Philadelphia, Mel landed his first pro broadcast job at WIFI-92.

WIFI; the former Top 40 station, was renamed: I-92 ‘Rock of the 80’s. It featured up n coming artists that the other lame stations would touch: Duran Duran, Devo, Adam & The Ants, and The Ramones to name a few.

The station needed a big personality to present the hot, new sound. Listeners were sick of hearing ‘Stairway to Heaven’ and the stupidity of DeBella’s Morning Zoo. Mel Toxic to the rescue.

WPST, WDRE, and WYSP were other Philadelphia stations that rocketed in the ratings with the help of the Toxic Avenger.

Connect with Mel Taylor on Linked-in